Series or Stand-Alone? How to tell if your story is a fling or a long-term commitment 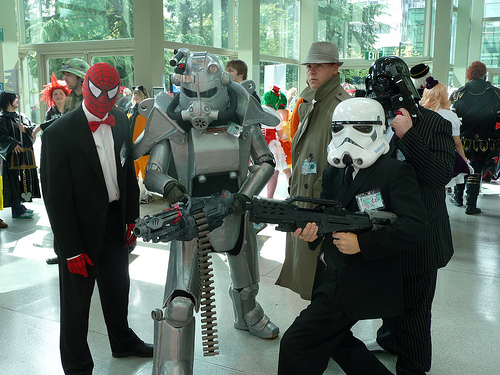 Recently, as modes and methods of storytelling multiply and morph (yeah, say that five times fast), I’ve begun to consider my fiction stories in terms of movies vs. TV series.

It’s a simple concept: a novel is like a movie. It can be stand-alone and needs to tell the whole story in one big chunk. Sure, you can have sequels, but you don’t have to. For a long, long time, when people considered writing “real fiction”, they assumed it would be a novel. A book was how you told a story and got it into the hands of your audience.

Of course, there were always shorter, serial stories, but they were either written a hundred years ago or relegated to small, niche markets. Comic books were serialized. A few fiction magazines might have run serials. But this was NOT the mainstream. (Am I wrong?)

Then along came manga.

Story as a Series

Oh, manga, how I enjoy thee! By the time a Japanese comic book series (aka manga) was released in the U.S., it had already walked through the fire and become popular in Japan. It was then compiled into volumes to sell over here (well, that and being scanned and posted online by “pirates” aka fans who translated it themselves to share the manga love with their non-Japanese-speaking friends).

One of the lovely things about manga was that it was volume after volume of drama (or action or suspense or horror or romance), enriched with character after fascinating character until you had a core cast of 12-20, and illustrated in a variety of styles. The story would go on and on and take its time getting to the end. Some manga authors handled this well, and you never felt like it was dragging. Others you wanted to strangle but somehow they kept you coming back anyway. There was something for everyone, and there was enough to keep you going for months. Or years. Some manga series wrapped up neatly after 10 volumes. Some are 50 volumes and still counting. It was like a TV series between two covers that you didn’t need electricity to watch. Er, well, at least during the daytime.

With the advent of manga, part of the U.S. audience learned to read (and love) serialized fiction. It is my belief that the story-reading world is totally poised to start enjoying fiction outside the usual novel/book format. Far beyond the relatively small readership of manga, we have something else that has taught America how to enjoy serialized stories. I’ll get to that in a second.

Now, I wouldn’t want to read a regular novel chapter by chapter. Would you? I like reading at my own speed and being able to stay up all night to finish the story if I want to. If it were a regular novel, I’d wait until the whole thing was released and buy that — not read it bit by bit.

BUT. What if the chapters were actually “episodes”?

We do it with TV all the time. We’re totally used to it, in fact. You can tell a long, involved story (a la Babylon 5) or you can intersperse episodes that move the over-arching plot forward with other episodes that reveal the inner workings of the characters or just have fun with strange new aliens (a la Star Trek Voyager). And as long as each episode gives us a satisfying emotional experience and a sense of resolution, then it’s okay if it also introduces new mysteries or challenges for next week’s episode. Ah, now we’re talking!

Consider this: It’s a simple fact that SPENDING TIME WITH YOUR CHARACTERS will create a place in the audience’s heart. It will create emotional attachment. (Assuming you’re a fine writer and your characters are engaging, etc, etc, etc.) Whether TV episodes or manga or book series, loyalty and desire and enjoyment increase with every hour invested in the relationship with the characters.

Why else are Trekkies such fanatics? Fans will debate whether Kirk is better than Picard until they’re blue in the face, and love every minute of it. They’ll recount lines of dialogue between Kirk and Spock and Bones and Scotty, and revel in it every time. Well, okay, maybe Trekkies are just weird, but you get the idea.

Mission Impossible, James Bond, Perry Mason, Leave it to Beaver, Sherlock Holmes, The Lord of the Rings, a bazillion soap operas I never watched, Babylon 5, Stargate SG-1, Lost, White Collar, Friends, The A Team, G.I. Joe, okay, so I don’t pay enough attention to be able to rattle off a bunch of good examples, but I think you can fill in the blanks.

People (for good or ill) love to get addicted to a series of stories about the same engaging characters. And if you like to write that kind of story (or series of stories), today’s world is opening a bunch of opportunities just for you.

Of course, not every writer wants to write like this. Not every reader wants to invest in a series.

Not every story should be told this way.

The important thing right now is to remember to ASK YOURSELF the question! “What format best suits my story? Is it a book or a series of episodes? A movie or a TV series?”

Think about people who are using the Kindle and other e-readers. There’s more and more ways to offer content piecemeal or via subscription. What about subscription websites and RSS feeds? Direct fiction subscription feeds to your phone via mobile app?

It’s a wild frontier out there, and not everybody’s ready to embrace it. But it’s happening, whether you jump into the fray or not. And I’m strapping on my harness and bungee cord, ’cause that cliff is lookin’ mighty fine to me. If at first I don’t succeed, I’ll bounce back and try it again. You should, too!

What TV series has most engaged you and left a lasting memory of the characters and what they experienced?

Do you prefer stand-alone books and movies? Or ongoing stories with the same characters?

Are you writing something right now that could work better as a series of episodes?