Today, I want to continue a conversation that started over on Mike Duran’s fine blog, on his post “That’s Just YOUR Interpretation!” He’s actually responding to yet another blog in his post. Technology facilitates deep conversations that cross space and time. Sometimes even with people who don’t know you’ve addressed them. Isn’t it grand?

I don’t really have a quibble with what Mike said, but in the comments a discussion started about how there is safety in numbers when it comes to biblical interpretation.

“So while any one individual’s interpretation may be wrong, it would be an arrogant person to in effect say based on my interpretation, the majority of Christians now and throughout history are deluded and wrong. Based simply on the laws of probability, the chances of that are infinitesimal.”

Rick Copple is a fine thinker, and I respect him. This post is not intended to argue the point of whether or not the bulk of core, classic Christian doctrines are still good guides for us today.

I’d rather say that his comment was a jumping off point. A catalyst that triggered the question:

Pretty sure that 80%-90% of people who call themselves Christians would look at me like I’m an idiot and say,

If You Get Your Truth from Church, Who is Really Your God?

“Oh, wait!” My imaginary 80-90% of Christians would quickly back-pedal. “I get my truth from the Bible, of course!”

Really? You just open up your Bible every day and read it and it all makes sense to you, and you find out everything you need to know about God, life, the universe and everything?

“Well, no, of course not. It’s not like I have a degree in bible study or something. I learn about the Bible from my pastor, and I read books by Christian theologians. I’ve read Augustine and Tozer and Chan, Chesterton and Sturgeon and White. I even dabbled in Wigglesworth and Lake and Kuhlman, but don’t worry — some friends warned me about those guys and I don’t take them too seriously. I do the best I can, but it’s not like God has an opinion on everything that happens in my life. And even if He did, it’s not like I can just ask Him and get an answer.”

That’s about the best answer you’d get from a huge portion of Christians, that’s probably considered an exemplary Christian. Someone who desires God, who wants to know more about Him.

And they’re still only saying they trust some other person to explain the Bible to them.

How many people do you know who would look you in the eye and say they’ve had an encounter with the Living God? [tweetthis url=”http://clicktotweet.com/1fc3X”]

Great! I’d like to think my Christian friends would say that, too.

Now, how many would tell you that He speaks to them and guides them in daily decisions?

How many Christians who are not pastors would claim to have an intimate familiarity with the Bible and say they have some “revelation” about what some of it means?

Look at all the Sheeple 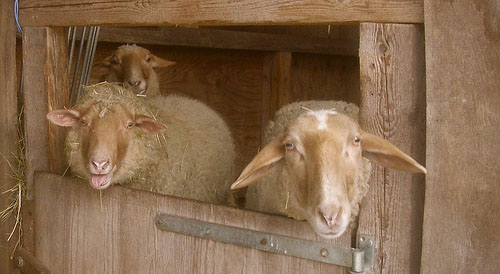 I love my pastors. I’m thankful for the Bible teachers I have learned from. I am abundantly grateful and delighted that we have access to the writings of Christian thinkers through the ages. I love many of these men whom I have never met so much that I’ve given them nicknames and consider them friends. Friends I already know and just won’t see in person until Heaven.

But we aren’t supposed to live on milk forever, we should grow up and eat the meat of the Word for ourselves (Hebrews 5).

As Christians, we shouldn’t be forever sipping grass smoothies provided by our under-shepherds! [tweetthis url=”http://clicktotweet.com/2_eVl”]

When you drive by the farms and ranches of your State (wherever you live), what are those fluffy grayish white creatures in the pastures? You know, the ones who are grazing on the grass of the field?

Is it just me, or don’t healthy sheep feed themselves?  [tweetthis url=”http://clicktotweet.com/fLecv” size=”ttsm”]

Stay tuned… not done with this question yet.

Your comments may influence my next post, so don’t hesitate to join in!

Categories: Bigger on the Inside
Tags: bible studybiblical interpretationchristian living

I answered the other one first. Oops.

Anyway, I live encounters with the living God. My day invariably involves multiple conversations with God.

I don’t see any reason why I should turn to men for answers that I can get directly from the source.

There’s got to be a balance somewhere between getting directly from God and falling into error and forming some really strange cult. Proverbs 18:1 says “A man who isolates himself seeks his own desire; He rages against all wise judgment.” Also, we know some are appointed to be teachers, which would be unnecessary if we were only to feed ourselves all the time. We need each other; we can’t say “I don’t need you” to another part of the body. I’m not advocating either extreme–always be fed or always feed yourself–just saying you can’t expect to not have any more grass smoothies.

Besides, grass smoothies are yummy. 😉

I posted most of my answer over at Part 2. But as for sheep – I’ve actually been thinking about that a lot lately. See, my church drives me batty during the worship part of the service because of the way things tend to go with standing/sitting.

About halfway through the first verse or just when the chorus hits, someone will stand up. I it’s someone in the middle/front you can bet someone will join them in 2 seconds, and then another and another and then everyone is standing cause no one wants to be the odd duck out. The ripple effect is much slower but easier to see when the first person is in back or a far side, where only a few can see them. This happens with almost every song! The leader rarely has to ask us to stand cause it’s going to happen sooner or later.

It cracks Hubby & I up. He doesn’t stand often because he has Plantar Fasciitis and standing or sitting for one or two songs can be the difference between walking to the car after church or hobbling while hunched over in pain. I often stay seated with him just to be supportive. And a few Sunday’s ago, I was feeling rather uncharitable. Everyone stood up around us and I leaned over to my hubby and, quietly, under my breath, said, “baa!”